2 dogs and a sheep 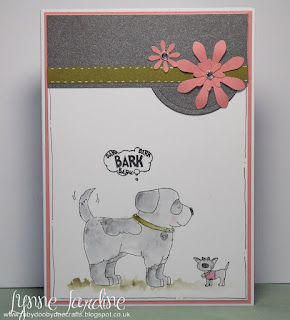 Evening crafters!  Hope you're having a good weekend.  We ended up going for a scoot up the coast to Carnlough!  There's nothing nicer than fish'n chips at the seaside!  Wee Rubydoo is pooped after the excitement, she's lying here snoring her head off :) 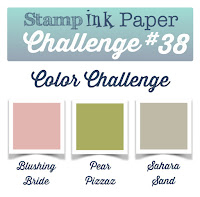 Coloured with watercolour pencils.  Spectrum Noir sparkle added to their collars and little pink jumper, and then clear gloss over the top of the sparkle. 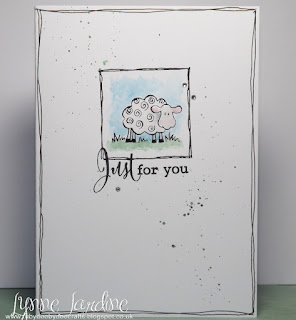 My second card is a super quick CAS one ... though when you cost in the time I spent looking for the stamp I originally wanted to use, it maybe wasn't so quick after all!  Anyway, in my search I came across this cute little sheepie that I don't think I've ever inked.
Not sure of the maker of the sheep, but the frame round the sheep is from Stamps by Judith - I managed to stamp my frame wonky, but sure that's noting new anyway ;)

I watercoloured the bg behind the sheep, and then splattered the green on my base too.
Spectrum Noir sparkle added to the fleece, and then clear gloss to the head and hooves.  Bit of bling from my stash, a doodled border to match my frame and that's it! 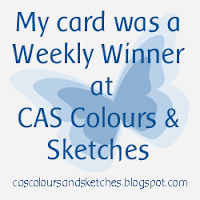 She's a very appealing little woolly sheep and very deserving to be stamped! Thanks for joining in the challenge at CC&S.

Great cards, Lynne! Love the big dog / small dog card, and "bark" is the perfect sentiment, indeed! Thanks for playing along with us this week at Stamp Ink Paper!

Very sweet cards, Lynne! I'm smitten with that sweet sheep! Love them, my friend...hope you are well!

Adorable card Lynne, love the cute image. Thank you for playing along with our Challenge at Penny's Paper-Crafty. We would love to see you again ... Anet DTx

Lynne your doggie card is so cute!!! Love the bark sentiment and I agree it is just right. Thanks so much for joining us this week at Stamp Ink Paper :)

Wonderful cards, love those cute dogs. I have a couple from the same company, wish I could afford the lot. The little dog makes me think of Jake (our fella) who thinks he is a big dog playing guard duty.

A really cute doggie Lynne and a rather nice desing as well.

Many thanks for joining us at Penny Black and More challenge this month.

I love both of the cards and the one with the sheep is just soooo adorable! :)

Mmmmm fish and chips at the sea side!! Almost as good as your SWEET cards!! Your doggie stamps just make me giggle.

Great cards Lynne, those dogs make me smile, especially the tiny one with the jumper!! Great sheep too...very ewesful I would imagine!! xx

Adorable cards! I love the hand-drawn border and splatter on the sheep card - wonderful details! Thanks for playing along with us at CC&S!

Lovely use of the sketch, the square frames your little sheep beautifully. Thanks for joining us at CC&S again this week. Stef x

Two beautiful cards, that sheep may be elusive but he's cute! Glad you were able to enjoy the sea air today. Cara x

Such pretty cards. I especially love the dogs. I know my pups can say so much with just a "bark". :) Thank you for joining us at Stamp, Ink, Paper!!

Your card is so sweet! I love the adorable puppy. Thank you for joining our challenge at Creative Knockouts. We hope to see you again!
~ Bonnie DT

Every time I visit you I get distracted by wee Ruby! Little cutie-patootie. But I digress... Now about your card ... oh look there's a wee dog on it too! LOVE this project, Lynne. Thanks for joining us at ATSM.
x Asha

Both cards are darling! The sheep one is a beautiful CAS!
Thank you for joining us at ATSM! Hope you join our newest challenge!
Lilian
The Leaf Studio

Both your cards are adorable. Thank you for playing along Simon Says Stamp A Bit O' Green Challenge :)
Gayatri xx

Cute cards, Lynne! Those dogs just make me smile - and more so since "bark" is the sentiment. he he You could use that card for any occasion. I also admire your doodled borders. The always look so GOOD! I'm afraid if I tried it, they'd look like a three-year-old did them.

cute cards! i love the bark sentiment too; it's too funny! thank you so much for playing along with us at penny black and more.
linda

I loe the sheep, it's adorable! And I like the double borders, they frame everything perfectly. The sentiment also works really well, by straddling both parts of the card. Thanks for joining us at CC&S this week. Caro x

Sounds like you had a lovely trip out and I agree fish 'n' chips always taste nicer at the seaside! Love your card, beautifully CAS and the sheep is so cute! Thanks for playing along at CC&S this week. Hugs Bev x