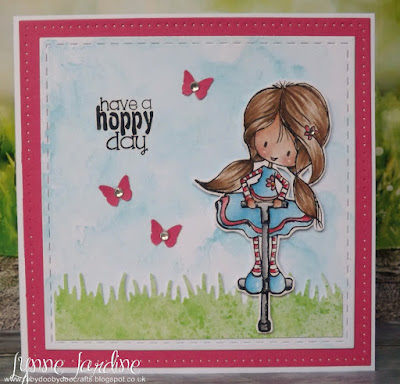 Well our heatwave is official now, and we've a hosepipe ban for the first time in 23 years!  Rubydoo got a short back and sides yesterday, so she's a happier girl now without her fur coat on!

This little girl on her pogo stick is an oldie from Tiddly Inks - coloured with watercolour pencils and popped up on foam pads.
My sky was inspired by the CAS on Friday challenge - I puddled some pale blue watercolour onto some acetate and then pressed the card into it.  I love the effect and reckon I'll be using this again!

Northern Ireland very nearly broke it's own record for the hottest day today, just missed it by 0.3C, so the 30.8C record still stands!   Did you know this is how they measure temperature?: www.bbc.co.uk/weather/features 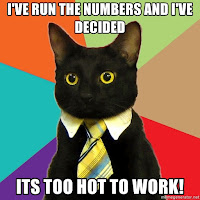 Anyway, it's lovely weather if ....
* you don't have to wear 'work' clothes and you're in your shorts and a light vest (and it would be heavenly to ditch the bra!!)
* you've your toes in the ocean
* you've a cold beer in one hand and/or an ice cream in the other
* the air conditioning on the bus actually works!

Not so lovely sitting in a non-air conditioned office watching the sunshine outside, and especially not when it feels like 90% of the country is off on holiday!  (I was the only one at the bus stop yesterday morning - some days there's up to 20 of us there!)  Thankfully tomorrow's Friday, so only one more day to get through before I can get those shorts on!!  And if none of our neighbours are about I'll be ditching that bra too hahahaha 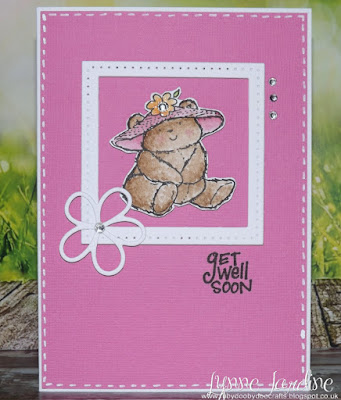 Anyway, I've been colouring in the garden, so here's a few just to use some of them up.  No mojo for fancy design, so they're dead simple

This first one uses an oldie Penny Black - coloured with watercolour pencils.  Both the bear and the frame popped up on foam pads.
Daily Marker 30 Day Colouring challenge 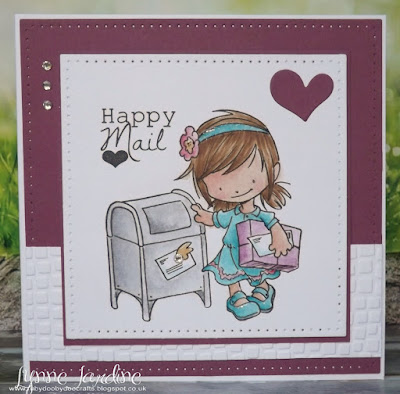 And this one is a Whiff of Joy cutie.  Again coloured with watercolour pencils.  Clear gloss added to her shoes and headband.
I added a little heart and then embossed the white panel with an old cuttlebug folder.  And that's it really! 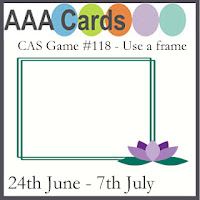 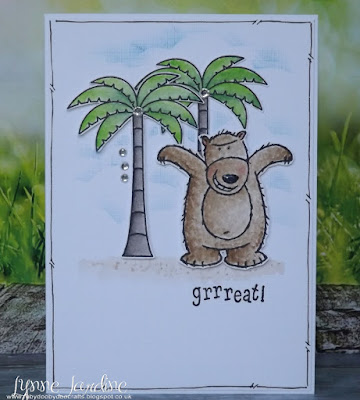 We'd another lovely sunny day today, it's just so nice being able to sit in the garden and have fun colouring!   I'd actually put away the seat pads of the chairs outside as I'd figured we'd had our summer, but hurrah, it's come back again!  Remind me I said that when I'm moaning that it's too hot in work LOL 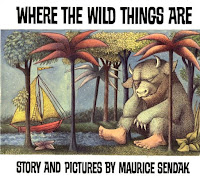 This card is based on the last Library Challenge #9, I'm a bit late in playing as the new book is already up!
My scary bear is an olide from Stampin Up and the palm trees are from an MFT set.
Coloured with watercolour pencils.  The tree to the left and the bear are both popped up on foam pads.

Email ThisBlogThis!Share to TwitterShare to FacebookShare to Pinterest
Labels: ~ Stampin' Up, Misc card

Christmas mice and a Teacher Thanks 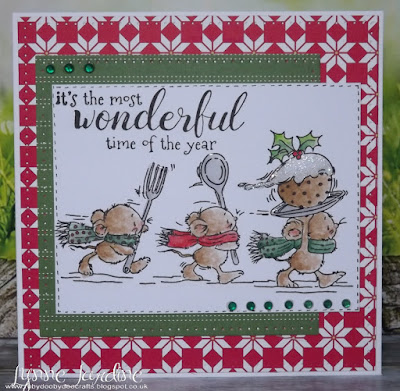 We'd a lovely sunny day today and sure what else would I be crafting out in the garden but Christmas cards! We've a heatwave on the way next week so maybe I'll get a few more made hahaha ;)

This one uses an older LOTV stamp, I'm still gutted that they've stopped making rubber stamps :(
I've coloured it with my watercolour pencils, sparkle added to their scarves, clear gloss to the cutlery and gloss/glitter to the icing on the pud.  Yummmm, I love Christmas pudding!! 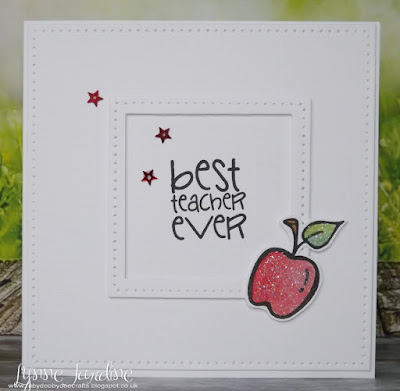 And this one is a special request from my niece for her teacher.  There's a bookmark to go with it but it's not quite finished yet!
I die cut the frame and the apple and popped them up on foam pads.  Sentiment/apple from an old Verve set.
Daily Marker 30 day colouring challenge
Posted by Lynne in NI 11 comments:

Email ThisBlogThis!Share to TwitterShare to FacebookShare to Pinterest
Labels: ~ Lili of the Valley, ~ Verve, Christmas 2018, Teacher 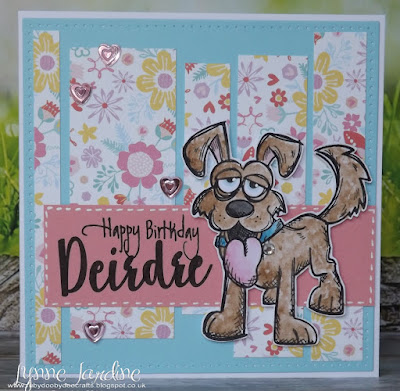 Awww boo hoo I can't belive my 2 weeks off work are almost up :(

I'd planned to get ahead with my card making while I was off, but all I've managed really are a few personalised ones.  This one's for a mate in work - she has a mad labradoodle that I kinda thought this guy looked like. Doggy popped up on foam pads. 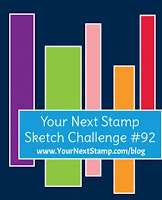 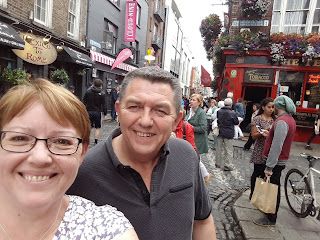 And here's a wee pic from our break in Dublin.  We'd a great time, plenty of walking about seeing the sights and a few wee beers too ;)  I can definitely recommend it, though at times in some of the pubs round Temple Bar there were more tourists than Irish!!
Posted by Lynne in NI 8 comments: 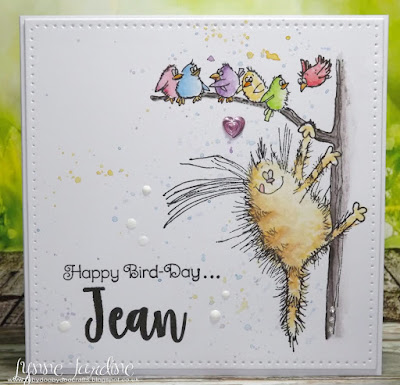 Wow how is it Friday, one week down of my holidays already!  I've been busy, busy, busy though, and squeezed in my 50th birthday too!  I've a couple of days in Dublin to look forward to next week too, so that will be good craic as well :)

This card is for my Aunt Jean , thought I'd make her a silly one!
Penny Black image - coloured with watercolour pencils and clear gloss added to their eyes and beaks, and then the BG splattered in matching colours.

We do have a mad ginger cat in the neighbourhood - we've caught him a few times lurking near our neighbour's house where the starlings are nesting.  He loves nothing better than torturing poor Ruby in the garden too, just saunters past the gate to set Ruby off and then stands back laughing! 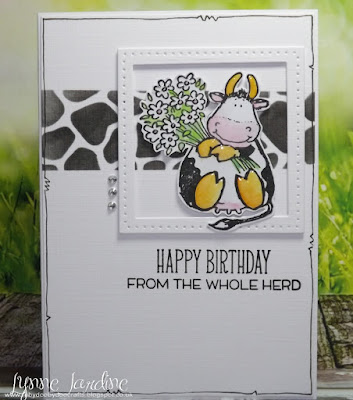 This one kinda looked different in my head to how it turned out!  If I'd thought it through I would have had my stenciled panel a wee bit lower down.  Oh, and I would have stuck my frame on straight too ;)

Posted by Lynne in NI 12 comments: 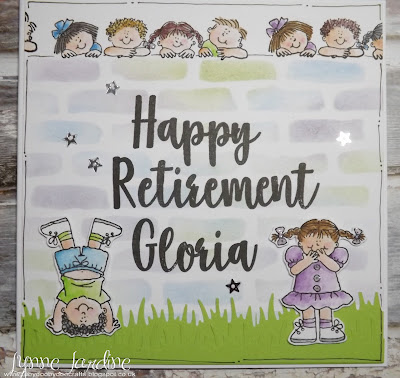 My brief for this card was to make a retirement card for a lady who runs a playgroup.

The first stamps that popped into my head was this oldie set from Stampin' Up  - I think it's called Kids at Play but I wouldn't swear to it.
I repeated the stamp at the top so it looked like a load of kids were peeping over the wall and then drew in a line to join them up.  Coloured with watercolour pencils and the 2 kids at the bottom were popped up on foam pads.  Background chalked through a brick stencil.  My grass border is an old Martha Stewart punch.  Little silver stars from stash. 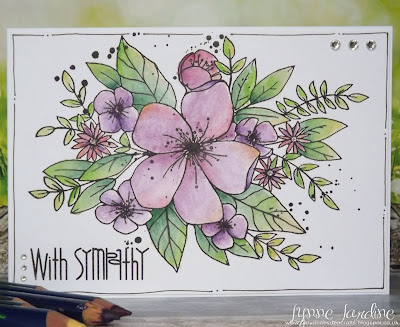 I found a fabulous colouring tutorial for flowers today on ChristineCreations blog.  She's used copics but I had a go with my watercolour pencils.  I like how my leaves turned out but think I need a bit more practice on my flowers.  Maybe if I'd used colours which were more different rather than the very similar pink / purple / thistle theme I used - though I think it turned out better than past efforts (like this one)

Email ThisBlogThis!Share to TwitterShare to FacebookShare to Pinterest
Labels: ~ Concorde & 9th, Sympathy/Thinking of You 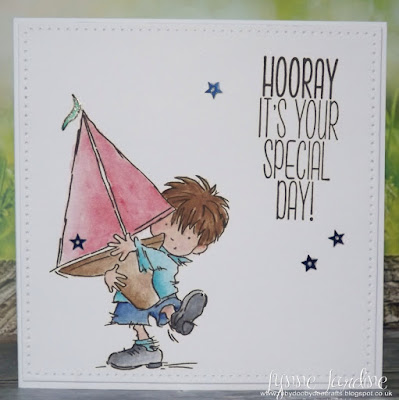 Yippeeee that's me off work now for 2 whole weeks  :)   :)  :)
May and the start of June is always a mad hectic time at work, so I'm ready to slow down for a while.  I haven't had much time for crafting, so I'm hoping to get some squeezed in while I'm off and join in with the Daily Marker 30 day colouring challenge.  The weather has been absolutely glorious here this past few weeks, so fingers crossed the sun will hang about for another wee while.

This one's a nice simple card, the sentiment does look a bit wonky in real life, but I don't think it looks just as bad as it does here!  I might die cut another panel and stick it over the top as it's annoying me now that I've seen it.
My stamp is an oldie LOTV, coloured with watercolour pencils.

Posted by Lynne in NI 10 comments:

Email ThisBlogThis!Share to TwitterShare to FacebookShare to Pinterest
Labels: ~ Lili of the Valley, Birthday (Male) 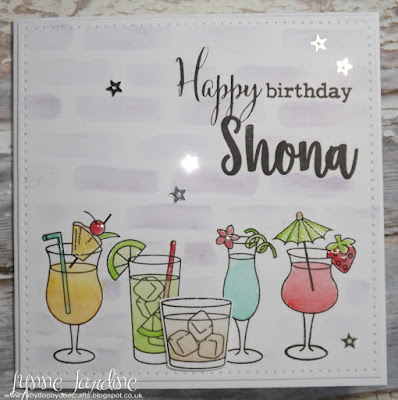 This card is for my friend who loves a wee cocktail or three ;)  so I reckon this card will give her a laugh.  I hadn't intended to add the brick stencil BG, but those old inky fingers got in the way again and it did a good job of disguising the marks.
Bit of a crappy photo, but it's too late now to take another! 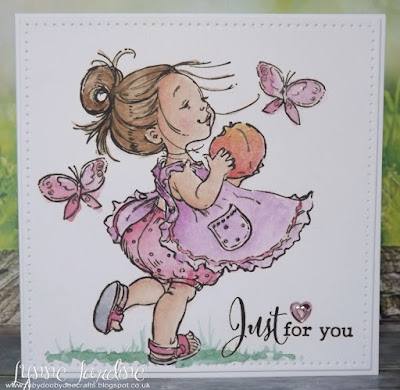 We've had the most glorious run of sunny weather recently.  Though when it hits 27 degrees in work with no air-con it's a tad too hot!  And not helped either when they still have the heat on!!!!  #melted

I won this Penny Black cutie ages and ages ago and she's never seen ink until today! I've no idea why as she's so pretty!  Coloured with watercolour pencils - I'd no peachy coloured watercolours, so put a layer down first and then went over it with several shades of ordinary pencils.  Sparkle added to her apron trim, butterflies and the peach; clear gloss added to her sandals and lips.