Hi all, and Happy Mother's Day for tomorrow to all you Mums out there!  I'm sharing my Mum's card this evening.  I've used my new Penny Black daisies, it's a bigger stamp than I was expecting (no I didn't read the dimensions when I was ordering LOL), but it works well enough in this DL size.  My new PB butterfly dies also made a surprise appearance after I managed to get a dirty smudge on my sentiment 😜

I should have taken a photo of my own pot of daisies, I'd forgotten I had some mini daffodils planted in the same pot, but they look amazing popping through the daisies!  We've had such a lovely spell of sunny spring weather, though there's talk of it getting cold during the week and a chance of snow! Hopefully it's just the weathermen getting over excited again! 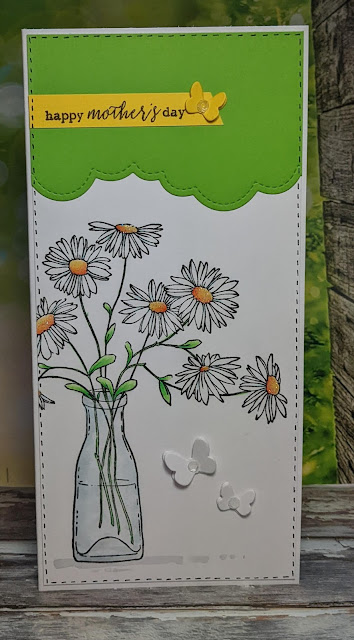 Layout inspired by the sketch at Try Stamping on Tuesday #548 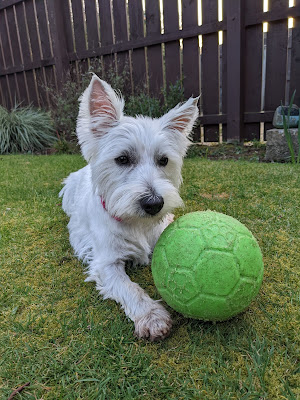 Pupdate..
Miss Molly has been back at the groomers after her puppy introduction a couple of weeks ago.  I'm not entirely sure how well behaved she was, but she came back lovely and clean and tidy, and oh my goodness her fur is soooo soft!
Posted by Lynne in NI 10 comments:

Hi all, and Happy St Patrick's Day!  No drowning the shamrock for me, I was out weeding instead LOL!  We get the day off work so I just had to book tomorrow as well, so a nice loooong weekend ahead AND it's supposed to be sunny for the next few days too, yippee!  It would have been great craic to be in Dublin for the parade,  I'd say it would be fun trying to get served at the bar though! 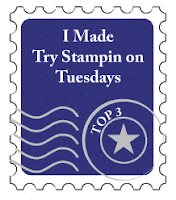 I've been struggling with my mojo recently so it's been a bit of a battle making these!  This first one was an absolute faff, it started much simpler but then I decided to add the die cuts behind the plants, got them prised off (and ripped half the purple panel in the process), and then the little butterflies and sequins appeared next.  I'm still not 100% thrilled with it, but it's better than it was! 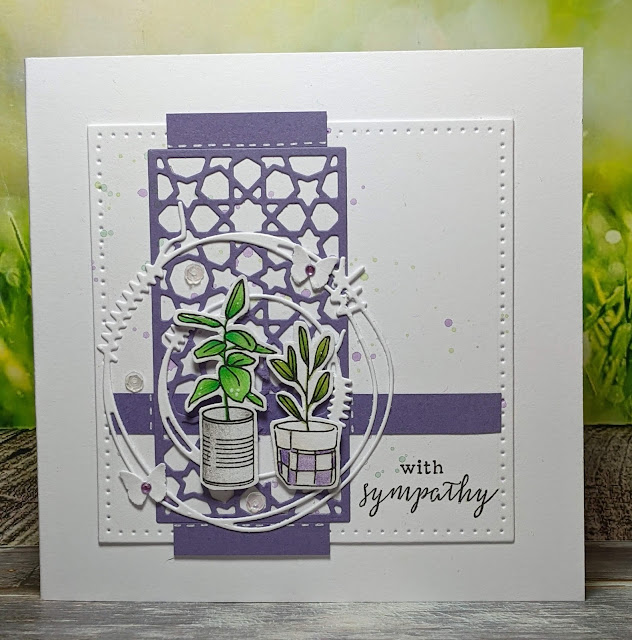 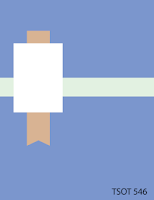 Believe it or not, my layout was inspired by this sketch from Try Stamping on Tuesday #546, but I maybe got a bit lost!

This Christmas card was another faffing session... that black panel was originally silver, and then white before I could decide what I was doing!  Snowdude from Simon Says Stamp and I think the DP is from MFT. 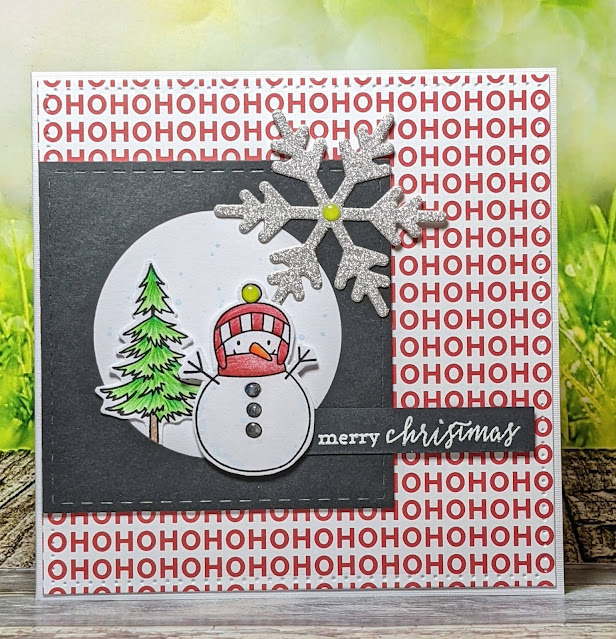 Miss Molly has had a busy time recently.  She was in for a wee op a couple of weeks ago but is back to 100% fitness and 100% naughtiness!  She's also been in for her first puppy grooming session since this pic was taken so she can see out now LOL 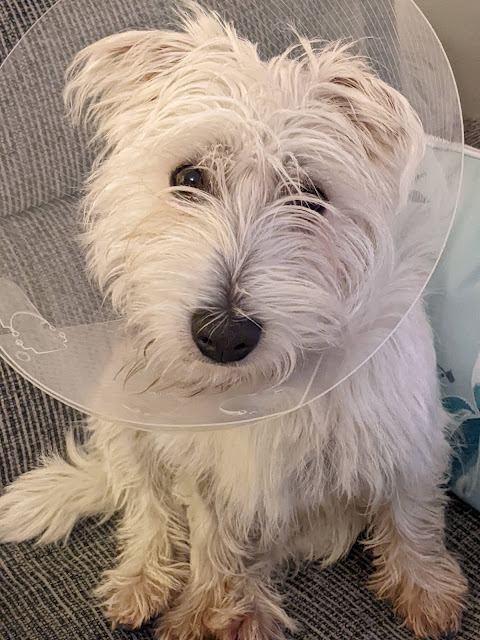 Posted by Lynne in NI 13 comments:

I'm delighted to be Guest Designer over at Stamping Sensations and the theme for March is "Spring".  Hope you'll play along - there's a fab prize pack up for grabs too!

It's also the final Ruby's Memory Challenge over at Snippets Playground, so I hope you can play along there too!  When Di started this challenge back in February last year it was just over a month from when our beloved Ruby died when we were still so so sad, and it felt like a huge hug from Di and the entire crafting community.  There has been an amazing amount of prizes gifted and Di has donated a fabulous amount of ££ to the USPCA.  So a massive THANK YOU to everyone.  We now have Molly to entertain us and keep us busy, but there will never ever be another wee dog like Ruby xx. (the snippet on my card is the tab in the corner. It looked like it needed a wee something and a leftover scrap of purple was just it!)

I've used this sweet Easter set from Lil' Inker which I LOVE - the font of that sentiment just makes me happy.  That little bunny looks so pleased with himself to have a basket full of choccy eggs AND a big sparkly carrot!  This card's for my Mum, but I'm making a few other variations of it for friends and family... so that's a lot of colouring and a LOT of fussy cutting! 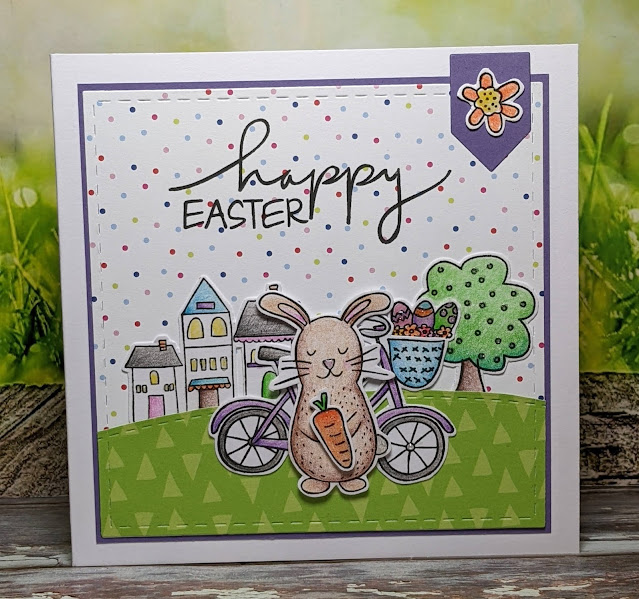 Addicted to Stamps #424 - any occasion

Posted by Lynne in NI 12 comments:

Hi all!  Such a beautiful spring day we had today, blue skies all the way but cold cold air and reckon there'll be another hard frost tonight.  Our daffs are all starting to bloom, so it was perfect timing to ink up one of my new stamps from Sweet Sentiment - a new to me brand from a new to me craft website, Jude Creates ... How did I only come across this Belfast based store now?!!!!

Coloured with polychromos; clear gloss added to the daffodil and glitter to the flower centre; die cut panel from Simply Graphic.   It needed a wee something to finish it off and this skinny strip of leftover yellow did the trick ☺. Looking at it now though I wonder why I bothered cutting that bottom triangle when I could just have simply embossed the corner? 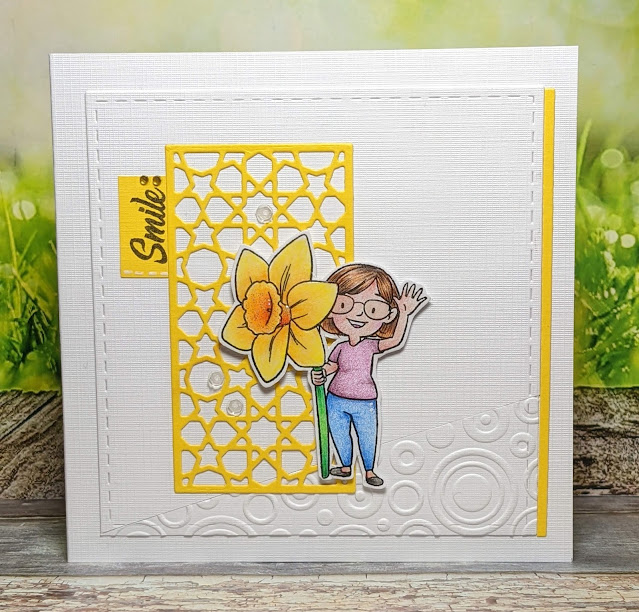 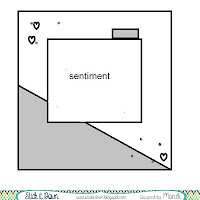 Layout based on Stick it Down March sketch
As You Like It - interactive or not?  I'm definitely in the 'not' camp as they're something I never make!  I think the most interactive I get is an action wobble (when I can find them that is!)
Simon Says Stamp Wednesday - add a die cut

THis second card uses an oldie from Colorado Crafts.  I got my watercolour pencils out for a change, I'm always a bit frustrated though when I use watercolours as my card usually ends up warping a bit, I obviously don't tape it down enough. 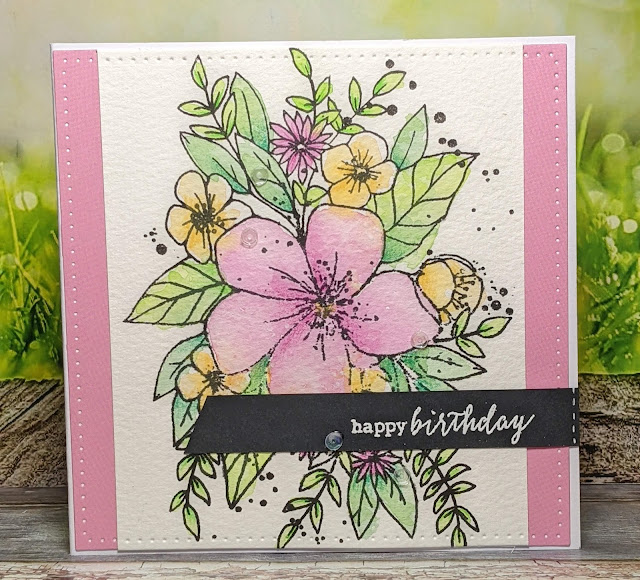 Layout from Freshly Made Sketches #525 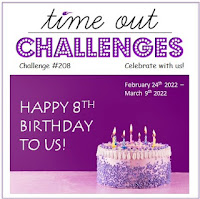 Hi all. I haven't shared one of my calendar pages for Mum for a while, so here's March.  We get St Patrick's Day off work so I've treated myself to the Friday too so that's a nice loooong weekend to look forward to.

I masked off this Anita Jeram stamp so the shamrocks could flow across the page - I didn't do a great job of it though so the sentiment came in handy to hide the duff edges ;) 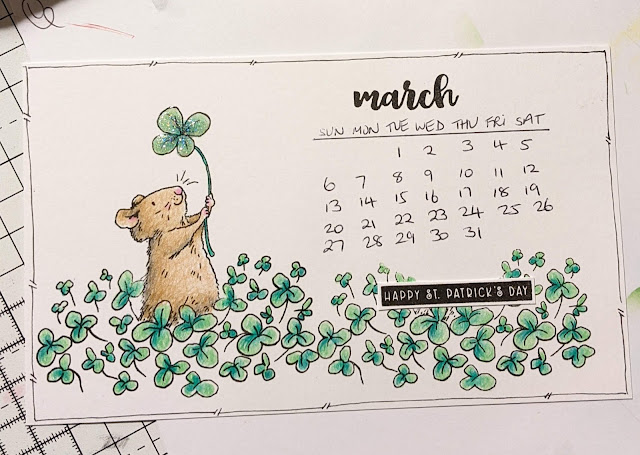 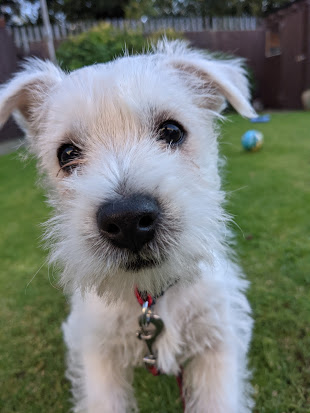