Some good news and Xmas Card #1 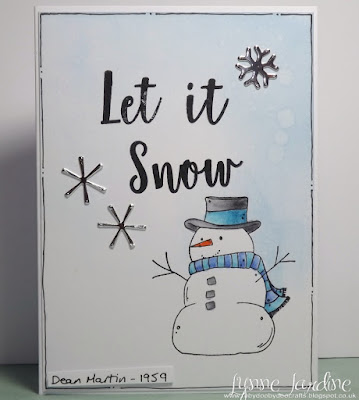 I've had 2 lots of great crafty news today!  First off I woke up and found that I was this week's Featured Stamper over at Splitcoaststampers!  I've played in this challenge for years, so I can't wait to see what everyone creates!  If you're on Splitcoast, I'd love it if you played along too :)
AND I won the Be Square challenge at Simon Says Stamp with this card, so I've a $50 dollar spending spree coming up! Yippee! :) :) :)

It's been such Brrrrr chilly weekend that I was inspired to make my first Christmas card of 2017!  I've used Snowman (assembled) from Eat Cake Graphics, and my gorgeous new alpha set from MFT.  I'd been on the lookout for a 'grown up' alpha set for such a long time, that as soon as I saw this one in their new release I had it in my shopping basket!  I inked up my background and added some Paper Smooches snowflakes cut from a snippet of silver card that was knocking round my table.  Sparkle added to the snowman's hat and scarf, and clear gloss to his nose and buttons. 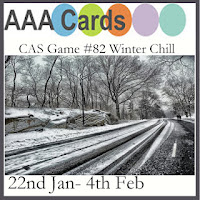 Oh wow Lynne what brilliant news and so well deserved. Lynne your card is gorgeous and frosty, the snowman is adorable I love the sentiment as well a wonderful winter land card
hugs
lorraine x

what great news Lynne. Congratulations on all counts. You deserve to be recognized. Enjoy your week. How fun to go SSS shopping. Whoo. Love this fun card. That snowman is so stinkin' cute and I love the silver snowflakes.

What a cute card! Thanks for joining us at Die Cuttin Divas this week!

Congratulations on both your "wins" - featured stamper and $50 credit from Simon Says Stamp. Have you spent it yet? Your card today is fab. I always love chubby snowmen on winter/Christmas cards.

What an absolutely charming card! I love how you kept it un-cluttered and clean-looking, yet it is still full of warmth and heart! And wow! You did justice to the alphabet! It makes me want to buy it myself! And congrats, too, for being featured on Splitcoast! I can certainly see why since you are so talented. I love everything about this card and am so glad you shared your work with us for this week's Simon Says Stamp Monday Challenge!

Love the soft blue on the edge, adds a lovely extra Chill to your card. Thanks for joining AAA

Great card!! So cute! Thanks for joining us at Die Cuttin Divas this week!

Great snowman on a pretty background. Thank you for joining our “Blue and Silver Photo Inspiration” Challenge this week at Die Cuttin’ Divas.

Such a gorgeous card Lynne - I'm not at all surprised you had such a splendid win! Wowser, that alphabet set is something else too!

I do wonder which hotel you stayed at in Albubeira. Hope it wasn't too grim!

Got in a muddle there - LOVE the puddy tat card you won with, well deserved. Although I still think card is a winner :)

So cute, love that snowman and the awesome alpha set!

Thank you for joining us at Die Cuttin' Diva's.
Shelly

Wonderful card for our Winter Chill Challenge. Love the lettering and those wonderful silver flakes. I also love the added touch of that feint blue inking in the background. Thanks so much for linking up and playing along with us at AAA Cards.

Well done you on your achievements, much deserved Lynne!! That is most definitely a lovely font and expect to see lots more of it xx

OMGoodness, a big congrats to you Lynne! How fun to be featured stamper over at SCS!!! And even better to win a $50 GC to Simon Says!! You will have lots of fun shopping. lol I love this cute, cute card! That snowman is just so adorable and you have colored him up so well! Hugs, Brenda

Simply sweet snow card. Love how you colored the snowman, and the placement of the snowflakes is perfect. Congratulation's on the Crafty wins. That makes a gal so happy. This is my first time by your blog, and it's lovely. You're little Ruby is adorable too. pjs-projects.blogspot.com

Congrats for your fun awards!! Love your adorable snowman and the choice of colors are lovely! Thanks for playing along with Retro Rubber and hope you join us again soon.

Lynne, I love how you partially inked the background! The best part of this challenge was getting to see all the adorable snowmen that were in the stamp set stash! And this one is ever so cute! The additional silver snowflakes add the right amount of glam! Thanks so much for including Retro Rubber in your stamping fun this week. Love seeing you in the gallery!

Awesome and sweet, this card is over the top adorable, those perfect silvery snowflakes add just the right amount of sparkle.
Thank you for sharing with us at RETRO RUBBER, hope to see you back in the gallery again soon.
Hugs,
Maria Rodriguez.

Love your adorable snowman! Thank you for playing along with Retro Rubber.

Hi Lynne! What a beauty this is! Perfectly cute snowman! And congrats on your news! That is so exciting and well deserved! Thank you for joining us at Retro Rubber!!

A gorgeous card with such a cute snowman, who I love.

I haven't put the stuff away I used for making last year's Christmas cards yet and here you are making one for this year! A great card to start the new Craft Barn Song Challenge.

Congratulations on your news Lynne! The card is so cute.