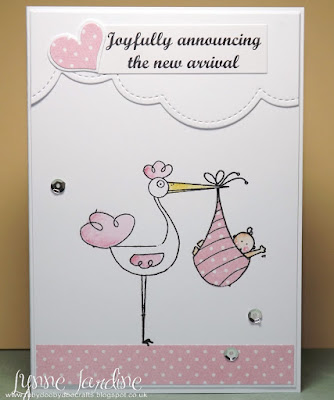 So this is what I've been working on this past week ... a request by my boss for a set of 30 baby announcement cards.  Now I HATE making big orders like this, so I kept them reasonably simple and with minimal colouring.

My image is an old-oldie from Shirley's 2 Girls.  Die-namics cloud die; paper smooches heart die.
Bit of bling in the form of sequins, and the job's a good-un!  I had loads of scraps in my pink pile so this was a great way to use them all up, plus it meant that there was a bit of variety in the set even though they were all the same if you know what I mean! :)
Computer generated sentiment.

so gorgeous lynne.i love your cas design and fab image and bling ;D

Suuch a sweet card for a little one. Thank you for sharing with us at 613 Avenue Create. Hope to see you back soon.
Cheers,
Aurora

This is a darling announcement card, Lynne. I can't imagine making 30 of them but I'm sure your boss appreciated it. I'm glad you're sharing it in the gallery at ATSM this week.

Well, you may have hated making such a big order, but by the looks of this one, they're fabulous! Bet your boss loved them. Hope he paid you extra!

I agree with your dislike of such orders. I cannot be doing with making the same card over and over again, especially as they lose their individuality. You have risen well to the challenge, this is so sweet :o)
Jackie xx

This is super cute!, Lynne! Wow 30!? That's impressive. I'm excited to have a new baby niece due any day now, but she's on another continent! :( Nice using up your different pinks. Lovely little bundle and super cute stork. Thanks for playing over at ATSM's CAS challenge this week. :) Melissa - DT

So, its a boy then? Sorry... Couldn't resist that. Great card and well done you for making 30 of them I'll bet they were delighted with your design, Jo x

Oh Lynne - how pretty! And you made 30 of these beauties AND thought this was an easy design? Sheesh!!

I just hopped over from Less is More - hadn't realised there's a maximum of 5 entries to challenges with one make. Why not make up for it and come and link straight into the Snippets Playground instead? We'd love to see you - this would be such a fabulous start too. I know this was published yesterday but I do allow a bit of back linking and would be delighted if you came to play (we have few rules and I allow peeps to link to as many other challenges as they wish). A weekly prize to be won and it's always anything goes so long as you use one or more snippets :) I'm not trying to poach folk from LIM, it truly would be lovely if you joined us.

Di xx (Less is More GD - and Headmistress of The Snippets Playground, snort!)

Brilliant card Lynne great image and sentiment, I really love how you have designed it simple yet stylish, superb work.
hugs
lorraine x

Lovely to see you in the Snippets Playground!

A beautiful card Lynne - very girly! - but I'm sure you were glad to get to the end of the 30th one!
Bernice

What a fabulous card! It really caught my eye over on Pixie's Snippers Playground. I love the design and the image is so cute. xx

Awesome job...I am very impressed you have made 30!!! Thanks for entering our paper piecing challenge at Creative Knockouts.
Amy-DT

Ah this is super, WOW 30 thats a big order, They will all look amazing though!!! Thanks for playing on MAWTT, Hazel (Didos) xx

Ooooh this is such a pretty card. Well done for making 30. I'm sure your boss was delighted. Barbxx

PS. I meant to say what a pretty girl Ruby is. xx