Love bunny and a confused penguin 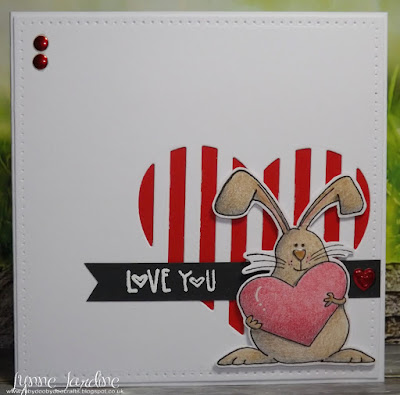 Such a bright beautiful winter's day we had today, the sun was splitting the trees, so it was nice to get all wrapped up and get to the local park for a dander.  I couldn't believe how much their daffodils are up already! It was Ruby's first outing after a surprise visit to the vets on Thursday to get 4 teeth out, poor wee thing. But she's back to her old self now, and woofing down her dinner :)

This first card uses some real old oldies - I'm not even entirely sure how ancient my Whipper Snapper bunny is!  I've also used a partial sentiment from an old Paper Smooches set and for some reason my MFT heart die rarely gets an outing!

Coloured with polychromos, sparkle added to the big heart and clear gloss to his nose. 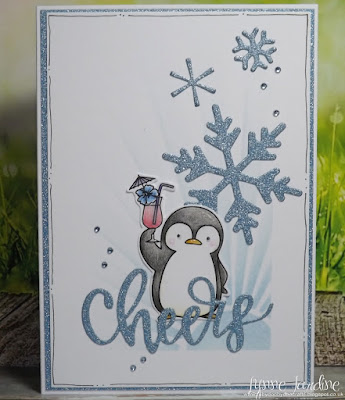 This card got a wee bit confused in the making!  It started off as a penguin based one for the Christmas Kickstart challenge, and this little penguin was the one I chose.  So then I thought my boozing buddy would be perfect for the 'cheers' challenge over at MFT Birthday and I thought I could make it that it could also double as a winter birthday card. But now I'm not sure it actually looks like either a Christmas card or a birthday card!!  Maybe it's more of a Thank You for after Christmas? 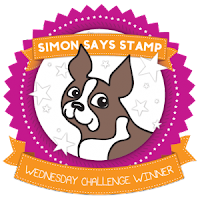 Both your cards are so cute. The pudgy bunny is the perfect star for your Valentine card. He's definitely got a big heart full of love to deliver. I also like your little penguin. It's 25 minutes to midnight here in Minnesota, and I could go for one of his cocktails about now. LOL. I think he works just fine for a Christmas card, but he'd also be cute on a thank you card. Wish we had one of your beautiful winter days here. Right now it's 0 degrees Fahrenheit (-18 Celsius), but with the wind it feels like -25 (-32 C). Brrrrr.

Big hugs to Ruby - I'm sure she'll not miss those teeth if they were paining her. Love both cards. Your penguin card is adorable and would work for a variety of occasions. Great to have you play along in the Penguin Parade Challenge at Christmas Kickstart, Jo x

I really like your bunny with a heart - perfect for a valentine card! Thank you for sharing it with us at Crafty Cardmakers this time.

Hahaha. I love the penguin. At our house we call those "foo foo drinks" and they are available year-round, so your penguin would fit in here just fine. BTW we live in NE Ohio so we get the cold winters too!

Such a beautiful card! The rabbit is adorable and I love the heart. Thank you for playing along at Creative Inspirations, good luck.
Hugs
Gina xx

So sorry Lynne, I hadn't realised I was so behind with my visits!! Poor Ruby, glad she is managing to eat again. Fabulous cards, that hear is perfect behind bunny and I love the penguin with the sparkly snowflakes behind xx

Congratulations, Lynne, you have won the Use a Stencil challenge at the Simon Says Stamp Wednesday challenge! Please visit our blog to see your card and how to claim your prize; (don't forget to give us your last name when you write us)! Happy shopping!

Laughing about your confused penguin but it's a lovely card. Daffodils in January!!!! That's confused!! Thanks for joining the fun at the Christmas Kickstart Challenge. Hugz