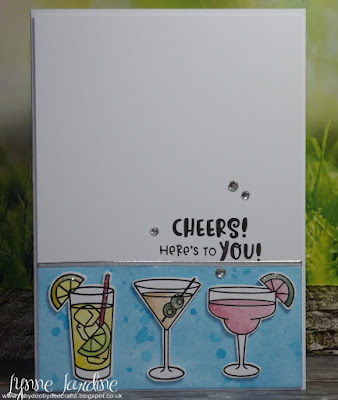 Oh brrrrrr it's been a wild old day today.  Me and Rubydoo headed out for a walk earlier as she loves a good windy day - started with blue skies and not a cloud in sight, and then 5 minutes later it was a total blizzard so we had to make a hasty retreat!  So the rest of the day was spent crafting, snoozing and cooking!

This first one uses a set from Newtons Nook.  I masked off and inked up the bottom 3rd - I'd a bit of a raggedy edge so added the silver peel off strip just to neaten it up.  Glasses popped up on foam pads and sparkle added to the booze. 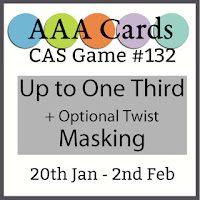 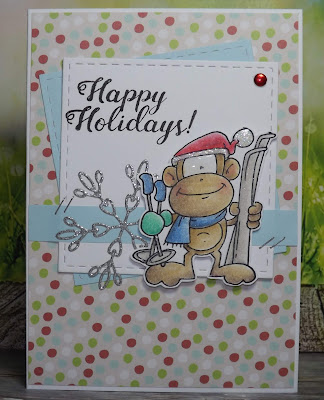 And this one's for my buddy Jo's Christmas challenge - this fortnight's theme is 'Bundle Up'.  Though I think I might use this one to put some Euros in for my nephew who's off on a school skiing trip shortly, so it's not even going to make it into my Christmas pile!
My monkey is an oldie from High Hopes and my DP is probably as old too!
Posted by Lynne in NI

I recognise that Newton's Nook set - I think I ws inspired to buy it because of a certain blogging buddy! Love both cards, but that monkey in his cosy hat and scarf is perfect for the current CKC theme. Love that snowflake - is it a stamp or a die cut? Thanks for playing along again, Jo x

Well that line up of cocktails certainly looks very inviting. Although with the chilly weather in the UK at the moment I'm thinking hot chocolate might be the answer! Thanks so much for linking up at AAA Cards, hope to see you playing again soon.

Hi Lynne loving both these FAB cards love the colours and images on both, excellent CAS styles
hugs
lorraine x

These are fantastic Lynne, a few cocktails would warm me up just right...It's freeeezing here tonight. The cheeky chimp will be a perfect bon voyage card too xx

Oh, my gosh, I love these cards! In fact, I could go for one of those fancy cocktails right now--just to take my mind off the frigid temps outside and the wind that cuts right through your coat. We've got a couple of record-setting cold days ahead, starting tonight. Brrrr.

Love love love these two winners!! the cocktails crack me up! : )

Love these cards, so fun!
Many thanks for joining us at Cute Card Thursday this week!
Debxx

Hello from your newest follower. Loving these two

What great cards, Lynne! I love the cheerful colours, so nice to see on a cold, grey day! Stay warm!

That skiing monkey is a riot, Lynne ... and how fun are those shimmery, shiny cocktails ... so tempting! Thanks so much for playing along with us at Time Out! Anita :)

Adorable! Thank you for joining us at the Pile It On! Challenge Blog~ Marciava Warrell Design Team Member

Such a wonderful card! I’d like those drinks LOL! Thanks for joining AAA Cards! Hugs Åsa