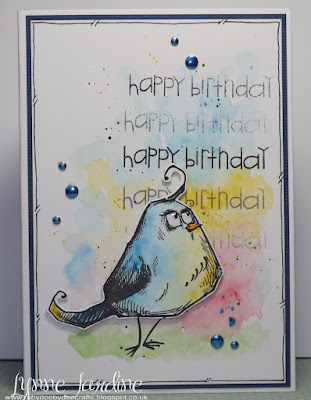 We've had a mini heat wave these past few days, we're so not used to it!  Doesn't help that we've no air conditioning in work - we've usually no need of it LOL.   I can't believe it's still 23 degrees at 9 o'clock at night!  Not to worry though, normal service is due to return tomorrow with the rain ;)

I've been on a lucky streak and won a Simon Says Stamp voucher recently and I've blown some of it on the new Tim Holtz dogs, I can't wait for them to come!  So I thought I should get some ink on this under-used crazy birdie!
I've also used some of my precious blue enamel accents - it's been in the 'too nice and too expensive to use' pile, but I've also ordered some of the new coloured Ranger enamel accents, so felt I could finally use these up!!!
All coloured with watercolours, and then the same colours splattered on the BG.  I went over the edge on his/her (?) eyes with my colouring, so drew in some eyelids and lashes :)  Bird popped up on dimensionals and clear gloss added to his eyes and beak.
The Daily Marker 30 Day Colouring Challenge
Posted by Lynne in NI

Love these birds and your super CAS design. Super colour combo too. Thanks for joining my MAWTT challenge, Jx

Lynne, I always enjoy seeing your cards in challenges, and this one is a beauty!! I love these Tim Holtz stamps - have a few birds stamped from a friend and received the crazy cats set for my birthday this year. Haven't purchased the dogs yet, but I think they are just as fun as the others!! I love your background - water-colored and then splattered with ink. You've done a great job!!

I love your card. I have this set and have yet to use it.. I must as I love this cute card. I want the crazy dogs also.. maybe even the crazy cats.. oh man.. I am so glad you shared your awesome card over at Creative with Stamps. I now have to play with my images.
Billie A
Creative with Stamps
Inspiration Destination
Catch the bug
Aud Sentiments

This is just adorable! Love those birds and finally purchased some last week! Thanks for the inspiration to ink them up! ;) Beautiful watercoloring!!!
Thanks so much for sharing with us over at CASology this week!

This is a perfect example of "you" Lynne and a great entry at AYLI. I was pleased to be at work yesterday because of the air con. Nice and cool here this evening so I might actually sleep!! xx

Brilliant card and so typically you! Cara x

This is great Lynne!! I really love the crazy colors you achieved for your crazy bird!! Super sweet.

We've been having a "heat wave" and it is due to last another few days! wow we are HOT and dry - the dry saves us! : )

Congrats on your win!! yippee skippee : ) can't wait to see what you create with your new goodies!

Your watercolouring looks fantastic and I love the crazy bird image. Fun birthday card! So glad you shared your creation at Tuesday Throwdown.

I don't have these crazy bird stamps, but I do love them! Your card is fabulous, and those enamel accents look great. We've been having a heat wave here, too. I can hardly stand to be outside! Hard to stay inside when we're camping in our little RV!!! Stay cool. We'll both have colder weather soon enough. he he

Fun birthday card! Love the bird and background! =)
Thank you for joining us at Creative With Stamps!
Lilian
The Leaf Studio

Lynne, I never tire of these fun SSS Bird Crazy stamps...I love the way you colored this guy! I love the enamel accents and the repeating sentiment. Stay cool, and thanks for joining us at CASology!

I really want those Tim Holtz dogs too, Lynne. They're so cute! These birds are awesome too. Love the fun background and repeated sentiment. Thanks for playing along with CASology this week!

So gorgeous, Lynne, the watercolour background is so pretty - and the bird is so much fun! Lovely colouring!

Lynne, I love what you've done with the bird...can't wait to see what you do with the dogs! Thanks so much for showing us your style at As You Like It Challenge!

Thank you for sharing your trademark style with us at AYLI, such a gorgeous make! Hugs xx

Brilliant card Lynne I love the splashes of colours and that Birdie is ACE, superb make
hugs
lorraine x

I love your version of the Crazy Birds! I am also waiting for the Crazy Dog stamps.