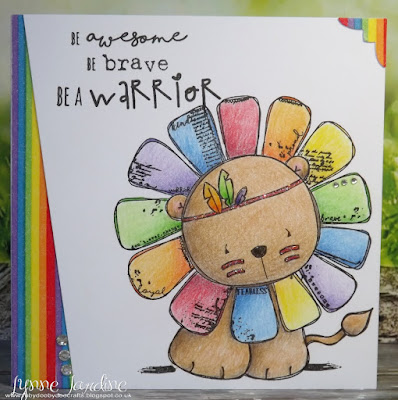 I've discovered new-to-me stamps - Alpaca Pals by Tracey Hey and I'm in love!! So of course I had to go on a wee spending spree ;)

This little dude was first in my shopping basket.  I'm not entirely sure if he's a cat or a lion, but I suppose he can be whatever I want!! I actually managed to use up some of my rainbow washi tape - if I was being picky I'd point out that that rainbow only has 6 colours!

Lion coloured with polychromos; clear gloss + glitter added to his cheeks and headband, and gloss to the little feathers.  Clear gems from stash. 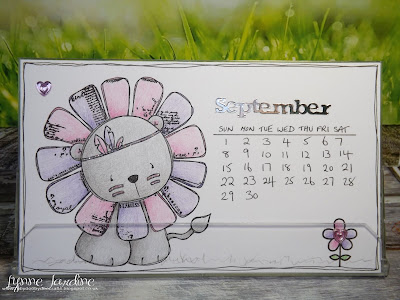 And here's Mum's calendar page for September.  It's a much simpler affair - I think I only used 6 pencils on this one as opposed to my entire arsenal on the last one LOL
Silver September sticker; pink metallic heart sequins; and again gloss/glitter on his cheeks and headband
Posted by Lynne in NI

All cats secretly believe they are lions so I wouldn't worry! Love this little guy - looks great in both versions, Jo x Now off to look at those stamps... Could be dangerous!

That image--be it a cat or a lion--is definitely a cutie. Not too ferocious looking, though. lol I love his rainbow-colored mane.

Such a sweet sweet card! Love the rainbow of colors!

Thanks so much for playing with us at Time Out!

This is so adorable! Love your creations! Thanks so much for sharing with us at ATCAS!

These are brilliant Lynne. Love this little lion and he looks great with a rainbow mane. So glad you found Tracey Hey. I first discovered her at Mama Makes. Since then I have bought a couple of sets. The rhino set is currently on my desk!! Bet Mum loved her calendar page, so cute. Always lovely to see you at AYLI xx

Two wonderful creations. Love that little cat-lion. He looks a little uncertain, and so adorable. Love the way you colored him on your card, and the metallic touches on the calendar are wonderful. Thanks for playing at Addicted To CAS and Less Is More.

Oh and I meant to add, thanks for playing with us at Time Out too!

Adorable cards ! Love this cute cat either in rainbow colours or in pink and purple. Great take on challenge. Thanks so much for sharing and for playing along at Less is More.

This is really great, thanks so much for sharing your make with us for this AYLI challenge. See you again soon! Squirrel Xx

Doesn't matter what he is, he's darling! I love that you incorporated the washi, actually I think that is brilliant. Thanks for joining us at As You Like It Challenge!