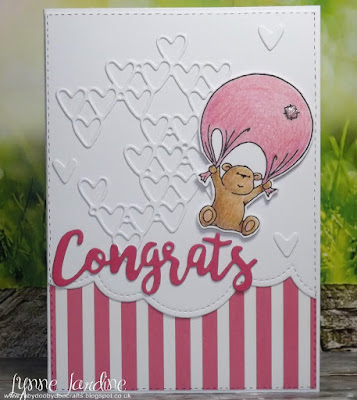 Just a couple of quickies from me tonight.  Well, when I say quick, this baby card ended up looking nothing like what it was supposed to!  I'd used a different sentiment, didn't like it so used this Congrats die instead.  And that meant that the image I'd originally coloured and cut out didn't look right so I had to go on the hunt for this little floating bear and colour and cut him instead.  Then I faffed about for a while trying to decide what to put on the background.  And of course I faffed about and changed so much I'm not sure it actually looks like the MFT sketch I started with - I didn't have any of the right shaped dies so I was struggling with this one before I even started! 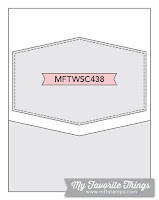 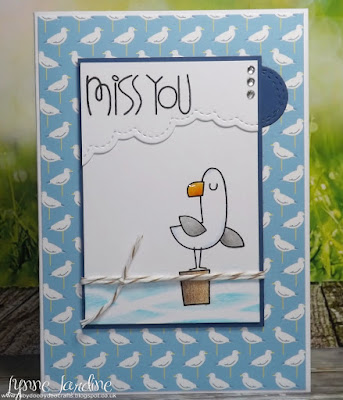 This one is for our Caretaker in work who's been off sick for a while and we just wanted to say Hi.
Don't you just love it when you find some DP that's perfect for your image!  It's the little things in life :)
I've used this seagull from an MFT set; Paper Smooches sentiment; and I had my cloud borders still on my table from the previous card so why not use one! Oh and a wave stencil for the bottom from Simon Says Stamp
Posted by Lynne in NI

Well, for all your faffing about, you ended up with a fab card! I love the image - it's a bit different than the usual baby card image and adds lots of interest. I like the clouds and the hearts background, too. Truly, it is super cute.

Your "Miss you" card is great, too. I've loved every card you put that seagull image on. He's definitely a keeper--and so versatile!

I have done that so many times Lynne, start out with one idea and end up with something totally different. In any case it's a lovely card for our His and Hers at AYLI. Love the hearts. A lovely Miss You card too, only crafters would showcase seagulls!! xx

A fab style of card. So cute. Thanks for joining AYLI challenge. Elaine

Gorgeous card, thanks for joining us at MAWTT, xxxx

All the 'faff' was definitely worth it, Lynne, this is such a sweet baby card! And your 'Miss You' card with the seagull is perfect to cheer your work Caretaker up - the gull is so much fun!

These are both gorgeous cards,

Thanks for playing along with our monochrome theme at MAWTT,

This is a beautiful artistic piece. Great for our monochrome theme. Thanks for sharing your lovely piece with us at Moving Along With The Times.

This is such a adorable card. I love the design.
Thanks for joining us at CRAFT Challenge.
Hugs Sheryl xx

I love your seagull card. So darn cute. Thank you for sharing with us at Simply Create Too - Myrna DT

Wonderful cards Lynne! I do like the seagull (he's sure to raise a smile) and the snippets bear card is gorgeous! What a lucky find the pink snippet was for the sentiment - and that wee bear is adorable against the background!

These are fab, thanks for joining in with the AYLI challenge